This is technically our first day of our long awaited tour of Korea. What is good about arriving at night is that you've probably regain much energy needed for your tour the next day. We slept around 2 am I guess and we woke up around 8. Mr. Young knocked on our door and we thought he is inviting us for church, since its Sunday. When we are about to head out, he asked if we book for a tour. I told him that nothing was finalized. I feel bad about that because we were supposed to take DMZ Tour, but due to the news going around that time (NK threatening SK), I thought that it will not be a good idea, plus we may not be able to go to some location because MAYBE security was tightened. A lot were concerned with our safety, but the look that we have on our faces says it all, "No news will stop us from going there!" Though as a precaution, we skip the whole DMZ tour. We head out around 10 am, which became the pattern of our entire tour of Korea. Itinerary for the day:

Since yesterday night, we saw FNC studio, we did not miss to snap some picture. At first I'm little shy standing next to a signage, but what the heck! I don't know when I'll be back so there.. click.. click..click.. We are so happy for we didn't know that we will be staying in that neighborhood and honestly its not on our itinerary to follow the YongSeo Trail. The weather is pleasant, though its a bit cold. But the weather is perfect for an all day walk. 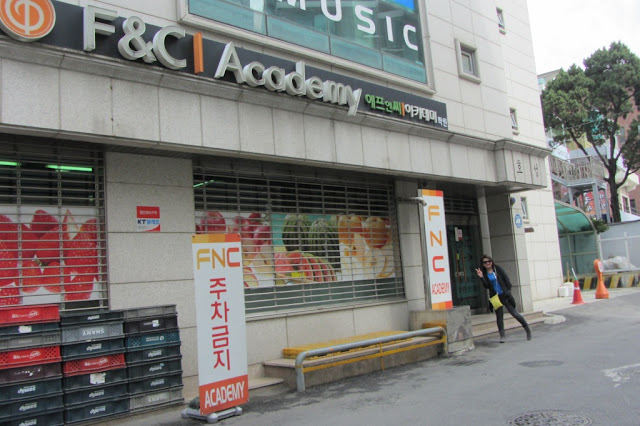 We had our breakfast at a coffee shop called Coffee Prince. Its not the Coffee Prince on the Coffee Prince Kdrama for as I believe its really called "Tiramisu Cafe". But simply seeing "Coffee Prince" made our day already, plus the cute barista! The barista has to be "prince-like". It is Sunday so the the streets are kinda empty and some shops are closed. There are thousands of coffee shops in Korea! yay! Coffee is so dear to me, thus seeing coffee shops left and right is such a treat. 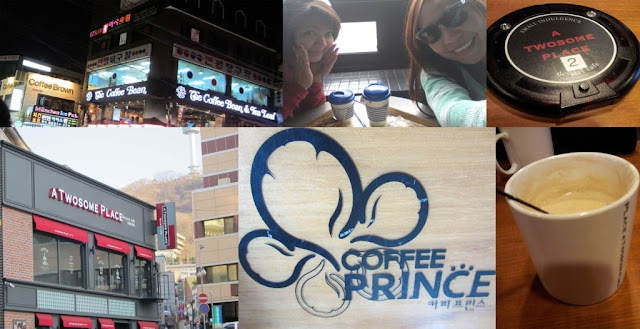 After breakfast we head to Hwaseong Fortress. We got lost confused on which line to transfer to go to  Suwon which is where Hwaseong Fortress is and its outside Seoul. Its probably an hour train ride. Plus another half an hour bus ride. But actually, we did hail a taxi for the buses are not stopping properly. They are in the middle of the road and people just get on and off from there. We don't dare to do that for 1) We don't if that is the right bus, we thought of asking first before getting in 2) We are scared to be hit by other cars. And so we took a taxi and showed the picture of Hwaseong Fortress. We probably stayed there for 2 hours and get into a bus to Suwon train station and headed back to Seoul. As  the bus travels to Suwon train station, we got to see the rest of the fortress, which is nice! Though for a moment we thought that we are lost again for the bus ride took longer than the usual. 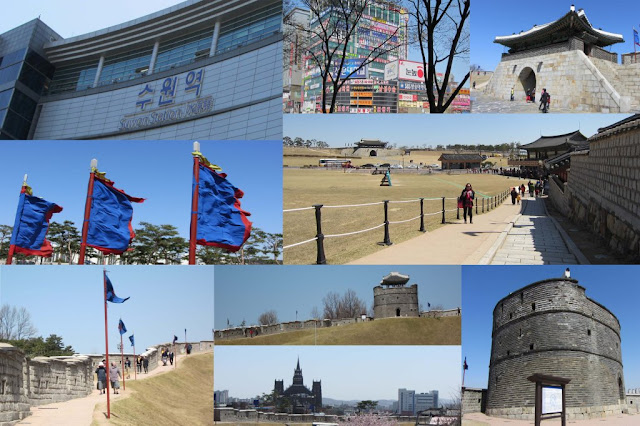 We were tempted to get down Sungkyunkwan University train stop, well of course because of the drama. Just hearing the announcement made us look at each other and smile, a big smile that is..

Tips if you are touring  Hwaseong Fortress:

Next stop, N Seoul Tower. I can't remember where we had our lunch. Maybe we did not get a decent one. I remember we grab some flavored waffles in Suwon Station and Banana Uyu (milk). Gosh the mere mention of Banana Uyu makes me nostalgic about Seoul (and hungry). Anyway, off to N Seoul Tower! We get off Myeong-dong Station, Exit 3. Upon exit, you will not fail to see N Seoul Tower. Walk towards the right of Pacific hotel and follow the signage. It will lead you to the cable car to N Seoul Tower. There was a long line probably because its Sunday.

We first check the Teddy Bear Museum. I enjoyed watching the moving dioramas and of course they are all teddy bears. I got a video and I can hear myself giggling. The museum displays both old (King Sejong) and modern (Psy) South Korea, hehehe. 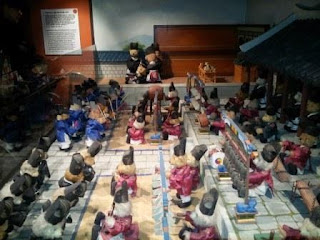 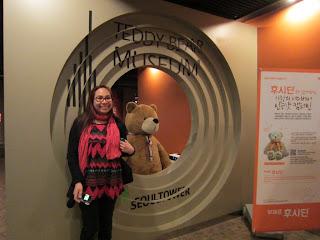 Next, we headed out to check the padlocks, the love padlock that is. Sometimes when I see a movie or drama, I have this reservation whether those things are happening in real life. Like those couples attaching those padlocks. I mean seriously? People still believe on those kind of stuffs? Anyway its still cute and romantic. Ugh! Those benches that meant to let a couple sit closer, so ingenious I should say, I just don't know if its comfortable. 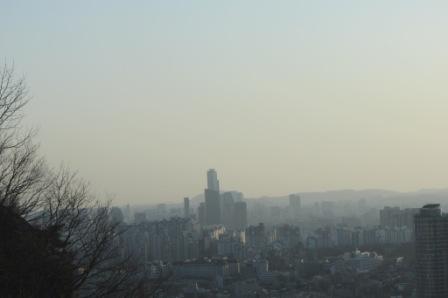 Last stop of the day is Myeong-dong. I right away recognized Migliore Bldg (Exit 5) . I saw in one post that this is where you can get KPop CDs at a lower price! And lower price indeed! Ajumma (bless her) is so helpful plus she gave us discounts! I nearly spent 200 USD on her store! yay! We got a lot of freebies plus you know ajumma knows which song is not included in a particular album especially in the case of albums that have gone through repackaging. Ajumma's shop is located at the 3rd floor and you'll get to see a lot of Korean fashion dresses and those cute shirts. By the way, her store is at Level 3, opposite nail art salon.

Actually upon getting off Myeong-dong Station, the underground market is so vast. Be sure not to be tempted because upon exit, there will be more stores! We just roamed around Myeong-dong after all our money is already gone to KPop and hoping one day I will be rewarded. Hehe. Ugggh! Blogging about Korea makes me want to have bibimbap! I posed beside Jang Keun Suk cut-out poster, at first I was shy but what the heck. I was once his fan, so  got a photo taken. We did not shop in Myeongdong because of the above. hehe.

Then we eat at a restaurant which I forgot the name, but its signage in Myeong-dong is attractive with drawings of chicken.  They will cook it on the pan in front of you. Its delicious, though for some it may be spicy (I have high tolerance). You will be the one to get side dishes. I didn't see any kimchi but there were some radishes, so its ok. And we call it a day.

Tips in roaming/shopping in Myeong-dong:

Overall, we had a wonderful day especially with our KPop album hauls, any KPop fan would understand.  Nowadays when I see a scene on a Kdrama, its not foreign to me anymore which makes me grin. I just hope that Seoul would have signage that you are nearby a train station, just like here in Dubai. If you happened to be on a place where there is a metro station, it will tell you where and approximately how far (by walk) it is.
Posted by cobyness at Tuesday, July 16, 2013

Forgiveness is much more than just saying some words in a prayer or putting time between us and the event.
It is a process that involves understanding the mercy God has shown in our life and recognizing how that applies to those who have hurt us.
- from Genuine Forgiveness article (intouch.org)